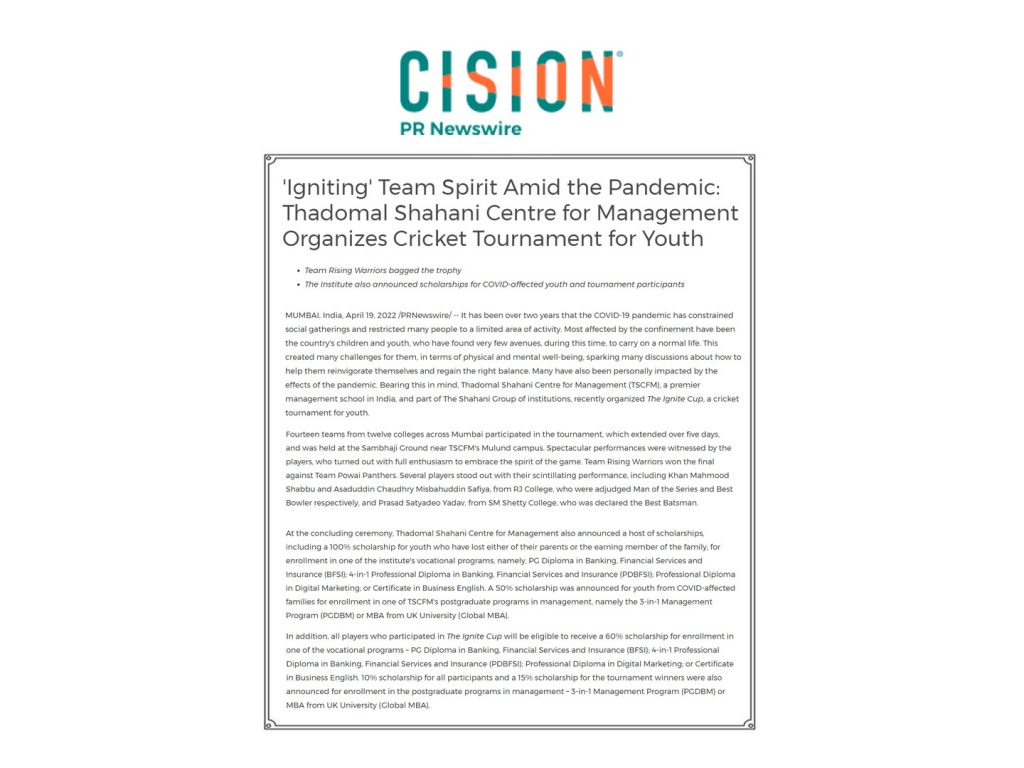 It has been over two years that the COVID-19 pandemic has constrained social gatherings and restricted many people to a limited area of activity. Most affected by the confinement have been the country’s children and youth, who have found very few avenues, during this time, to carry on a normal life. This created many challenges for them, in terms of physical and mental well-being, sparking many discussions about how to help them reinvigorate themselves and regain the right balance. Many have also been personally impacted by the effects of the pandemic. Bearing this in mind, Thadomal Shahani Centre for Management (TSCFM), a premier management school in India, and part of The Shahani Group of institutions, recently organized The Ignite Cup, a cricket tournament for youth.

Fourteen teams from twelve colleges across Mumbai participated in the tournament, which extended over five days, and was held at the Sambhaji Ground near TSCFM’s Mulund campus. Spectacular performances were witnessed by the players, who turned out with full enthusiasm to embrace the spirit of the game. Team Rising Warriors won the final against Team Powai Panthers. Several players stood out with their scintillating performance, including Khan Mahmood Shabbu and Asaduddin Chaudhry Misbahuddin Safiya, from RJ College, who were adjudged Man of the Series and Best Bowler respectively, and Prasad Satyadeo Yadav, from SM Shetty College, who was declared the Best Batsman.

At the concluding ceremony, Thadomal Shahani Centre for Management also announced a host of scholarships, including a 100% scholarship for youth who have lost either of their parents or the earning member of the family, for enrollment in one of the institute’s vocational programs, namely, PG Diploma in Banking, Financial Services and Insurance (BFSI); 4-in-1 Professional Diploma in Banking, Financial Services and Insurance (PDBFSI); Professional Diploma in Digital Marketing; or Certificate in Business English. A 50% scholarship was announced for youth from COVID-affected families for enrollment in one of TSCFM’s postgraduate programs in management, namely the 3-in-1 Management Program (PGDBM) or MBA from UK University (Global MBA).

In addition, all players who participated in The Ignite Cup will be eligible to receive a 60% scholarship for enrollment in one of the vocational programs – PG Diploma in Banking, Financial Services and Insurance (BFSI); 4-in-1 Professional Diploma in Banking, Financial Services and Insurance (PDBFSI); Professional Diploma in Digital Marketing; or Certificate in Business English. 10% scholarship for all participants and a 15% scholarship for the tournament winners were also announced for enrollment in the postgraduate programs in management – 3-in-1 Management Program (PGDBM) or MBA from UK University (Global MBA).

Speaking about the tournament, Amit Sharma, COO, The Shahani Group, said, “Over the past two years, we have witnessed many of our own students grapple with the myriad challenges that arose from the pandemic. A multitude of news reports throughout the lockdown has also chronicled the plight of Indian youth as they attempted to keep up with education while also dealing with personal loss, isolation, and physical and mental health issues. As the country has opened up again this year, we wanted to organize an activity that would interest these youth, and present them with an opportunity to collaborate and work as a team again, after being stuck alone for so long. A cricket tournament was a natural choice, given the high popularity of the sport in India. Through The Ignite Cup, we hope that we were successful in igniting in all the participants, the values of a game that fosters teamwork, analytical thinking, and a feeling of oneness even in a competitive environment.”

A cash prize of INR 21,000 was awarded to The Rising Warriors, along with the Winners’ trophy, while Powai Panthers walked away with INR 11,000 in prize money and the Runners Up trophy. The Man of the Series, Best Bowler, and Best Batsman were also bestowed with trophies.

About The Shahani Group:

Drawing upon its legacy of over a hundred years in the Indian education sector, the Shahani Group devotes itself to enhancing the careers of lakhs of students via its academic initiatives aimed at providing them with employment in diverse industry sectors. Helmed by Maya Shahani and Dr. Akhil Shahani, the Shahani Group is now in its fourth generation and encompasses a new generation of institutions in the areas of management, media, banking, real estate, digital marketing, and more. Along with praiseworthy initiatives such as – ask.CAREERS, Thadomal Shahani Centre For Management, Thadomal Shahani Centre For Media & Communication and ask Talent Services, the Shahani clan has been instrumental in forming over 24 iconic colleges in Mumbai, such as Thadomal Shahani Engineering College, HR College, KC College, and National College, among others.

As a result, it has been widely recognized for its work in the sector, receiving a bevy of awards, including the CFBP Jamnalal Bajaj Award for Ethical Business Practices, the Clinton Global Initiative Award, and the CII Education Excellence Award. Operational in four cities, the Group also has an educational technology division and job placement division under its banner. It runs several CSR initiatives aimed at providing education and healthcare for the underprivileged.

How can India achieve universal literacy as per the UN’s Sustainable Development Goal 4?