Next zen of female leaders in education 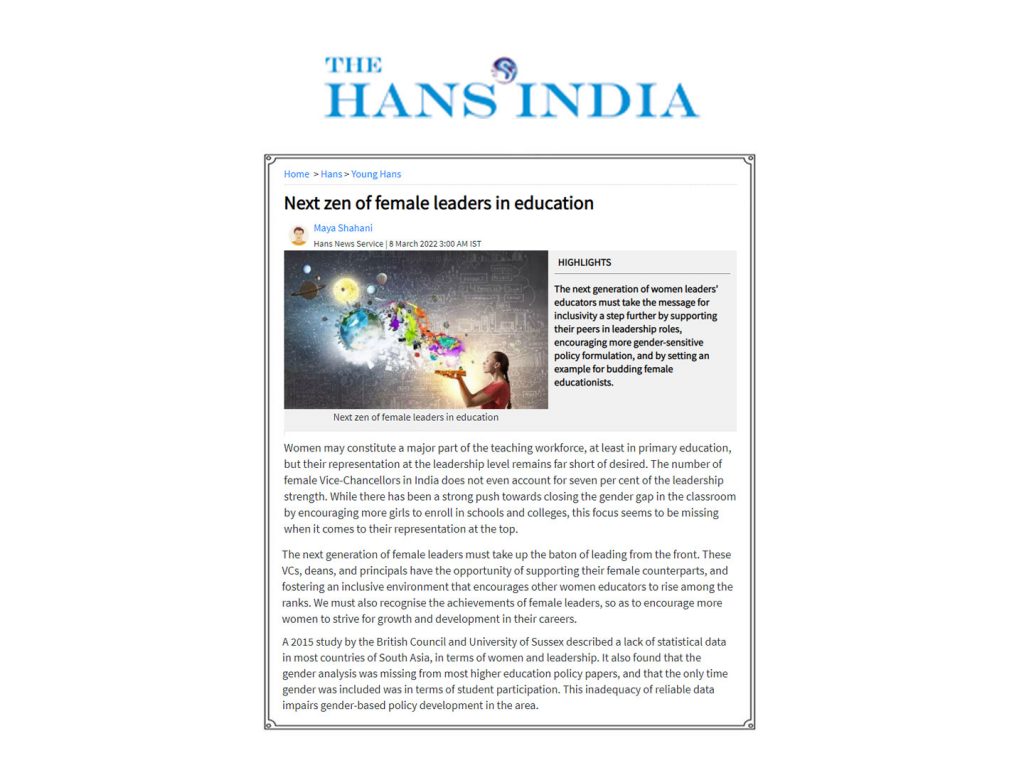 Women may constitute a major part of the teaching workforce, at least in primary education, but their representation at the leadership level remains far short of desired. The number of female Vice-Chancellors in India does not even account for seven percent of the leadership strength. While there has been a strong push towards closing the gender gap in the classroom by encouraging more girls to enroll in schools and colleges, this focus seems to be missing when it comes to their representation at the top.

The next generation of female leaders must take up the baton of leading from the front. These VCs, deans, and principals have the opportunity of supporting their female counterparts and fostering an inclusive environment that encourages other women educators to rise among the ranks. We must also recognize the achievements of female leaders, so as to encourage more women to strive for growth and development in their careers.

Need for policy support A 2015 study by the British Council and the University of Sussex described a lack of statistical data in most countries of South Asia, in terms of women and leadership. It also found that the gender analysis was missing from most higher education policy papers and that the only time gender was included was in terms of student participation. This inadequacy of reliable data impairs gender-based policy development in the area.

Yet, there has been some notable progress. In 2020, women teachers in primary education outnumbered their male counterparts for the first time, showing an impressive growth of 37% in just seven years. However, the ratio slowly changes in higher grades as male educators start outnumbering female teachers. With a differential salary structure and more opportunities for teachers in higher grades, women educators are often left behind due to their under-representation in this domain.

Leading the way Given the skewed balance in leadership, the next generation of female leaders has the opportunity to address this imbalance. There is a dire need to identify female leaders and groom them for top positions. Greater focus on women’s representation can push the drive towards encouraging deserving female candidates to take charge. Inclusive leadership at higher education institutions, through a more balanced gender ratio, will also ensure gender-sensitive policy development. We must also formulate a career-positive path for women who are forced to take a break, due to marriage or pregnancy, and wish to return to work.

Today’s female leaders will be taking forward the legacy of formidable women educators of India, such as Savitribai Phule and Mahadevi Verma. These leaders played a critical role in spreading awareness about the importance of educating girls in pre-independent India. The next generation of women leaders’ educators must take the message for inclusivity a step further by supporting their peers in leadership roles, encouraging more gender-sensitive policy formulation, and by setting an example for budding female educationists.

Rise of Women Entrepreneurs in EdTech